Home » Crop Circle Tours » The Crop Circle Information Centre is to move into the Wiltshire Museum in Devizes for the peak summer season.

The Crop Circle Information Centre is to move into the Wiltshire Museum in Devizes for the peak summer season.

It was based at Woodborough Garden Centre in the Pewsey Vale last summer, when it was visited by at least 5,000 people, the majority of them from overseas, but it will be in the museum’s art gallery from mid-June to the end of August. 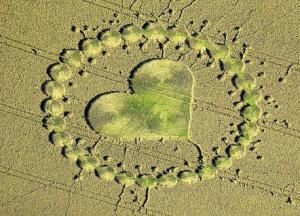 An intricate pattern in a field near Calne in August 2000

Museum director David Dawson said: “Having the CCIC here is a natural progression in our interest in the Wiltshire landscape.”

The crop circle pass scheme, introduced in Wiltshire last year, is to be repeated, but the charge has been simplified.

There were three types of passes at different prices – per day, week or month – and organiser Monique Klinkenbergh said it was confusing for visitors, so this year the pass will cost £10 for the entire crop circle season.

Ms Klinkenbergh, who has been studying crop circles since 2006 and spends her summers in Clench Common near Marlborough to investigate them, said the pass scheme had been received well generally.

Four farmers – David Hughes of Beckhampton, James and Jill Hussey of Hackpen, Jeremy Leonard of Netherstreet and John Hayward from Titcombe – signed up to the scheme to allow people who bought a pass access to their land which had crop circles. Each farmer received a payment to reimburse them.

She said: “People interested in visiting crop circles felt more comfortable with a pass. For 20 years it has been chaos. People didn’t know if they were welcome on farmers’ land.

“With the pass system people really valued the feeling they could explore knowing they were not doing an illegal thing.”

Last year 206 passes were sold and payments to farmers totalled £2,250 plus a donation of £500 to the Royal Agricultural Benevolent Institution.

Additional donations made by the public amounted to just under £5,000 and this has been carried over into the Wiltshire Farmers Crop Circle Fund.

Passes can also be bought at Stick & Stones Cafe at Woodborough Garden Centre, and Faux Art in The Parade, Marlborough.

Normal admission charges to the museum will apply for those who wish to visit the CCIC.

Last year was one of the sparsest for the number of crop circle formations.

In Wiltshire, there were 33 circles and just three others elsewhere in the UK.

This was the lowest in Wiltshire since 2006’s 22 reports.

It is thought extreme cold and wet spring in the UK delaying crops was a factor last year, when the first formation was on June 2. The first this year was on April 16, near Wootton Rivers.