Home » Uncategorized » Among the Ancient Stones, Magic as Potent as Ever

Among the Ancient Stones, Magic as Potent as Ever

WILTSHIRE DOWNS, England — Standing at the center of the Stone Circle of Stonehenge in the moments before dawn, lulled by low-hanging rain clouds, I am, for a while, unable to understand why so many pilgrimages have been made here. 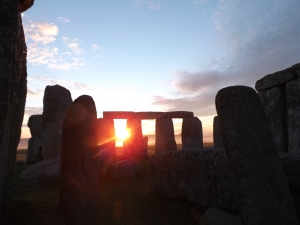 Sure, the setting is attractively pastoral, with gently rolling fields and dark patches of trees on distant hills. But the vista verges on the ordinary. I can even make out the line of a highway not far off, cutting across the meadows, commuters’ headlights poking through the mist. In the half-light, the surrounding stones seem almost familiar and scarcely mysterious.

Is this really the place that Thomas Hardy called “a very Temple of the Winds,” describing it “rising sheer from the grass,” its stones seeming to hum with sound? Did Christopher Wren, the great architect of St. Paul’s Cathedral in London, really think so much of Stonehenge that he left his signature chiseled in one of the stones? And why should this site now lure as many as 18,000 celebrants to a summer solstice festival on the day the sun rises through a gap between its central stones, bisecting the monument?

But after the rain, when the sun breaks through the clouds and the pillars of rock cast corridors of shadow, all misgivings are cast aside. In the privileged calm of early morning – an enviably timed visit that can be arranged with English Heritage, the government agency that manages the area – I begin to understand why more than 1 million visitors a year are drawn here. I see, too, why its nearly completed $44 million transformation has been so celebrated.

The renovation has eliminated a highway that nearly abutted the stones (leaving intact, at least for now, the heavily trafficked road some 500 feet away). And it demolished a similarly intrusive visitor center, replacing it with another a mile and a half away, invisible from the monument, designed by Denton Corker Marshall to appear delicately self-effacing even while enclosing an introductory exhibition, a cafe and an extensive gift shop. A shuttle transports visitors to the main attraction, which requires tickets, typically costing about $25, for entry at a specific time or about $35 for “out of hours” stone circle access.

This touristic enterprise also involves a kind of restoration. The goal is not to restore the stones themselves. That would have been impossible, even in the 12th century, when the earliest known history of Stonehenge appeared (in a volume now on display at the visitor center): Constructed by a race of giants, it was transported to its current site by the wizard Merlin.

And, anyway, what would Stonehenge be restored to? It began as a circular earthwork, created about 3000 B.C.; its major stone circle with enormous pillars topped by lintels dates to about 2500 B.C. The evolving ceremonial site included circles, ovals and horseshoe patterns and apparently remained in use for another thousand years. Extensive work in the 20th century lifted, straightened and set some stones in concrete to prevent tipping. (The largest weighs more than 35 tons.)

The goal now is to restore the landscape, which researchers have been examining recently because of its intimate connections to the site. This emphasis can be felt throughout the new visitor center. A 360-degree theater uses finely detailed laser scans of the stones to show the monument’s evolving shape, while a wall-size animated map shows Stonehenge within a puzzling network of mounds and ditches, barrows containing burial remnants, and vestiges of unexplained earthworks that extend for miles. Display cases show some 300 artifacts that outline the region’s varied modes of life and death during the site’s evolution.

A similar emphasis is evident in the elegant new $4 million Wessex Gallery, at the nearby Salisbury Museum, which gives a reverse archaeological history of the region, proceeding backward in time. Its 2,500 artifacts – including the Stonehenge Archer, a skeleton dating from as early as 2400 B.C., found in a ditch in 1978 – are accompanied by images of a pastoral landscape that still holds unexplored secrets.

I am also preoccupied with the surrounding landscape that morning, standing within the Stone Circle. It is an enclosure that leads us to look outward. During the hours of sunrise (and sunset), when shadows are long, the patterns change every moment. The shadows of the stones hug the ground, climb neighboring pillars, slide over nearby ditches.

The axis of Stonehenge was originally determined by the sun’s rising and setting during summer and winter solstices, when symmetrical movements of shadows must have been something to behold. But even visiting at another time of year, I feel as if I were in a languorously turning kaleidoscope. The stones provide a medium through which we perceive the landscape. We emerge, entranced by the expanse around us, attentive to its details. The site reveals the setting; the setting, the site.

At first, the landscape seems a nondescript series of meadows; now it becomes far more intricate. Look toward the northeast, and you clearly see faint traces of the Avenue, an ancient earthwork path that extends 1.5 miles, ending at the River Avon. One hypothesis is that the river was used to transport the stones of the inner ring (called “bluestones”) which came from Wales, some 150 miles to the west.

I walk across these fields and become aware of dips and banks, ridges and mounds: eroded remnants of ancient human activities, many seemingly related to the monument. Recently, the remains of a Neolithic human settlement were discovered at the Avenue’s other end, near a circular timber counterpart to Stonehenge. During the recent restoration, natural rock fissures were discovered beneath the Avenue that are aligned with Stonehenge’s solar axis and may even have determined the monument’s location. In an article in Smithsonian magazine this month, “What Lies Beneath Stonehenge,” Ed Caesar describes the latest explorations using three-dimensional GPS-guided measurements that have revealed new subterranean features.

The temptation is to think of Stonehenge as a “thing,” a monument erected at a particular time with a particular purpose. Yet displays here suggest that over the 1,500 years or so that the site was in use, cultures and rituals changed along with it.

One of the intriguing things about Stonehenge, as we are reminded again and again, is that it can’t really be pinned down; we will never know enough. Was it a burial site, a temple, an astronomical model, a healing center, a monument to the ancestral dead?

We are destined to feel unsettled, even after learning from the fine exhibitions nearby. In J.M.W. Turner’s 1827 watercolor of Stonehenge, on display in Salisbury’s Wessex Gallery, lightning strikes near the center of the Stone Circle. The flash is luminous, exhilarating. But dread mixes with illumination, mystery with enlightenment. Why is the outer ground littered with the carcasses of shepherd and sheep? A bolt from the heavens? We aren’t certain. It is a bit frightening, which makes the painting as uncanny as the place.
Edward Rothstein New York Times
Article source link: http://www.adn.com/article/20140909/among-ancient-stones-magic-potent-ever

By StonehengeNews in Uncategorized on September 10, 2014.
← English Heritage has opened five recreated Neolithic houses, in the shadow of Stonehenge. Christmas 2014. A perfect time to visit Salisbury and its Cathedral →