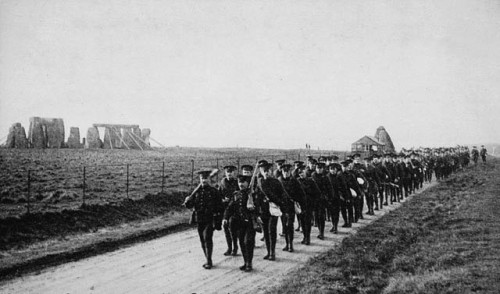 First World War soldiers training at Stonehenge
Soldiers at Stonehenge: Salisbury Plain and the journey to the First World War, is the title of a new exhibition due to open at the Stonehenge Visitor Centre on the 5 November 2014. The exhibition will tell the story of the (then) world’s largest military training camp at Stonehenge and the estimated one million men who, between 1914 and 1918, were trained there.
Dermot Martin, writing in the Salisbury Journal, reports that –
Records show 180,000 men were stationed at any one time on the plain during the First World War. Their personal stories, photographs and original objects will form the basis of the exhibition but evidence of their presence can still be seen across the wider Stonehenge and Salisbury Plain landscape.
Robert Campbell, head of interpretation at English Heritage, which is staging the exhibition…

By StonehengeNews in Uncategorized on October 8, 2014.
← Magna Carta tourist trail unveiled by Visit Wiltshire. Salisbury is the only UK city in Lonely Planet top 10 must-see places in the world →