A detailed plan of a medieval city has been produced by experts without any digging at the site.

The latest scanning techniques were used to uncover a network of buildings at the 11th Century Old Sarum near Salisbury in Wiltshire. 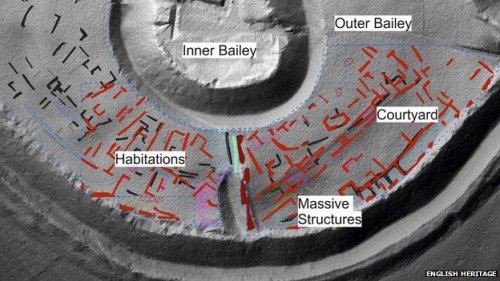 The results include a series of large structures, possibly defences, with open areas of ground behind possibly for mustering resources or people.

Old Sarum was the original site of Salisbury, which is two miles away

Students from the University of Southampton spent the summer on site

WHAT IS OLD SARUM?

It was originally an Iron Age fort, established around 400 BC, and occupied by the Romans after the conquest of Britain in AD 43.

This latest survey of the site was carried out by the University of Southampton and concentrated on the inner and outer baileys of what would have been the fort.

The university’s director of archaeological prospection services, Kristian Strutt, said: “Archaeologists and historians have known for centuries that there was a medieval city at Old Sarum, but until now there has been no proper plan of the site.

“Our survey shows where individual buildings are located and from this we can piece together a detailed picture of the urban plan within the city walls.”

By StonehengeNews in Sarum Salisbury Stonehenge Guided Tours on December 3, 2014.
← Current Archaeology Awards: and the nominations are as follows… Stonehenge discovery could rewrite British pre-history →