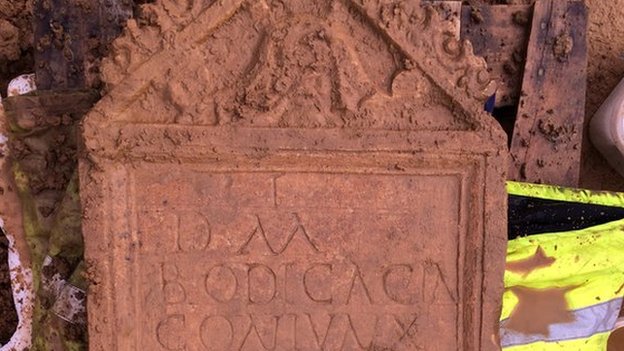 Roman tombstone found in Cirencester, England
BBC News Gloucestershire reports today on a rare Roman tombstone, made of Cotswold limestone, which has been discovered in Cirencester, England –
Cirencester, or Corinium as it was known, was the second largest town in Roman Britain after London. Neil Holbrook from Cotswold Archaeology said it was “very, very exciting” and the number of other such examples in Britain could be “counted on one hand”.
More here.

Raising the Roof: How to Build a Roundhouse

Have you ever thought about building a house…not just any house…but an Iron Age roundhouse!? The thought never came to my mind, until I saw a poster next to Dr Olly Davis’s office at the University. St Fagans National History Museum needed the assistance of CAER Heritage Project volunteers to help out and test our knowledge, endurance in a bad weather, and our physical fitness in a bit of experimental archaeology. 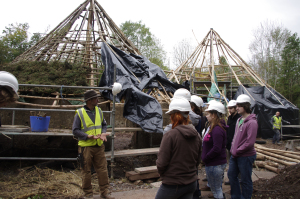 Olly would drive us out to St Fagans every week. The first time we were walking up the little muddy path towards the roundhouse building site, we weren’t sure what to expect. Needless to say, this was something completely new to all of us. But when we reached the end of the path and there was a small opening with two massive roundhouses staring down…