A RARE Saxon coin found in a field near Pewsey has just gone on show at Wiltshire Museum in Devizes after a public appeal raised the cash to buy it. 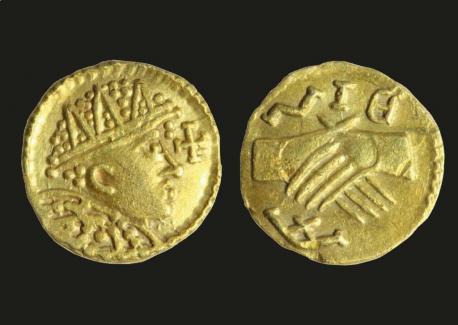 The tiny gold coin which was bought for £18,000 at an auction in London in December is now displayed under a magnifying glass so visitors can see its full splendour.

Members of the museum celebrated the return of the coin to Wiltshire with a reception last Thursday complete with Mark Routledge dressed as a Saxon warrior.

Museum director David Dawson this week spoke of the anxious moment he spent on the phone bidding for the coin that was found in a field at East Grafton.

He said: “It was incredibly nerve wracking. I was very pleased to get it for £18,000. To be honest we would have paid a bit more. But you never know if there is going to be a private collector who is willing to pay whatever they have to get something they really want.

“I was shut away in my office during the bidding but the whole museum must have heard my whoops after I made the final bid and secured it. We are delighted to now have the coin on show.”

The coin which dates from AD 675 was originally thought to have been French but it has now been confirmed that it was minted in Kent.

At the time of the auction at Spinks in London Mr Dawson said: “We are delighted to have secured this important coin to be displayed at the Wiltshire Museum. It is a powerful demonstration of the importance of the Vale of Pewsey and the Kingdom of Wessex.

“We are very grateful to the almost 50 people from Wiltshire and across the world who have supported the purchase of this important coin, along with the help of our grant funders.”

The museum was awarded grants towards the purchase by the Arts Council England, the Victoria and Albert Purchase Grant Fund and the Art Fund.

In addition, donations and pledges were given through a fundraising appeal launched by the museum.

The coin dates to the time of the beginnings of Christianity in Wiltshire and just after the burial of King Raedwald at Sutton Hoo.

Mr Dawson said the remarkable find shed new light on the Vale of Pewsey in the Saxon period. East Grafton was part of the parish of Bedwyn until medieval times.

There are a number of pagan Saxon cemeteries nearby and there was an early Saxon Royal manor at the Iron Age hill fort at Chisbury, just to the north of Great Bedwyn.

Later in the Saxon period, the focus moved to Great Bedwyn where there was a Royal Manor and an important Minster church. Bedwyn was held by King Alfred and it also had a Saxon mint in the time of King Edward the Confessor soon after 1,000 AD.

Bedwyn was very important and it was only with the building of its Norman castle that the focus moved to Marlborough.

Stephen Deuchar, director of the Art Fund, said: “We are delighted that Wiltshire Museum was successful in acquiring at auction such an important coin.

He said: “Very few coins of such quality exist, and we are pleased to have played a role in ensuring that this beautiful example can remain forever in the very locality in which it was found.

“It’s a wonderful addition to the museum’s collection.”

By StonehengeNews in Uncategorized, Wiltshire History News on March 8, 2016.
← Sights to visit around Stonehenge. Exploring the Cursus Barrows and Fargo Plantation →