Home » Uncategorized » John Constable’s Salisbury Cathedral masterpiece to be shown in city that inspired him.

John Constable’s Salisbury Cathedral masterpiece to be shown in city that inspired him.

Painter’s 1831 work completed after his wife’s death is centrepiece of new exhibition at Salisbury Museum. 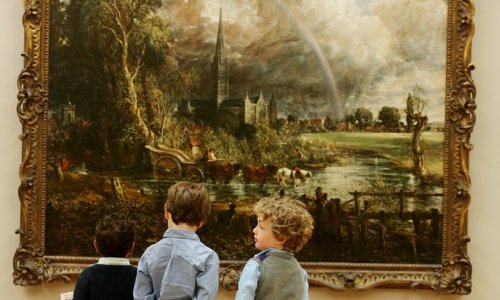 Salisbury Cathedral from the Meadows was bought by the Tate for £23.1m. Photograph: Graeme Robertson for the Guardian

After 185 years, the trees around Salisbury Cathedral have grown taller and thicker, shrouding all but the magnificent tower and spire. But, remarkably, the water meadows are still as lush and unspoilt as they were in John Constable’s day.

This is the view, including the shallow stream that draws the eye toward the magnificent cathedral, painted by the acclaimed British artist in one of his most important and best-known works, Salisbury Cathedral from the Meadows. And for the next six months, there is a rare opportunity to compare masterpiece and present-day view within a few minutes’ walk.

The painting, finished in 1831, is going home to the city for which Constable had a special affection, as part of a five-year tour, taking in Wales, Scotland and East Anglia. From Saturday, people will be able to see it at the Salisbury Museum in the cathedral close, alongside dozens of other paintings, watercolours, etchings and drawings of one of the country’s most awe-inspiring buildings.

“We are very excited that we’re displaying Constable’s masterpiece in the city that inspired him,” said Adrian Green, the museum’s director. “The museum is located opposite the cathedral, backs onto the water meadows and is adjacent to where Constable stayed in the close – so one can literally walk out into the canvas and see a landscape that has changed little since Constable’s time.”

Salisbury Cathedral from the Meadows is one of a series of 6ft canvases painted by Constable. Encouraged by his close friend and archdeacon John Fisher, who lived in the cathedral close, he began to make sketches for the painting while grieving for his late wife Maria.

“Constable drew Salisbury Cathedral many times from different viewpoints,” said Gracie Divall of the Tate, which owns the painting and organised its tour around the UK. “It was the place he visited most outside his home in Suffolk. But this painting is seen as one he poured his emotion into, rather than just depicting what he saw in front of him.”

The turbulent sky provoked much comment when the painting was first exhibited; one Morning Herald reporter remarked that “the sky is in a state of utter derangement”.

Meteorologists have pointed out that the rainbow depicted in the painting would be impossible given the cloud formations. However the Tate has commissioned new meteorological research, to be published this year, which suggested that a rainbow over the cathedral was not beyond the realms of possibility.

“Constable was using the weather to tell a story,” said Divall. Some have interpreted the storm clouds as a reflection of the painter’s turmoil at his wife’s death; others suggest they reflect the storms surrounding the Anglican church – in which Constable was an ardent supporter of tradition against reform – at that time.

The painting was bought by the aristocratic Ashton family in 1850 but was on loan to the National Gallery for many years. When the family decided to sell a few years ago, the National Gallery was already committed to buying works by Titian in the most expensive purchase in its history.

The Tate stepped in, raising £23.1m to buy the Constable, described by the gallery’s director, Nicholas Serota, as “one of the great masterpieces of British art”.

A delicate cleaning process in 2013 “made a huge difference to the vibrancy of the work”, said Divall. “There was a lot of staining, mostly nicotine, from when it was in private ownership and from when people were allowed to smoke in galleries. The painting wasn’t glazed.” The cleaning process had revealed details such as a cow in the bottom left of the painting, she added.

The painting has returned to Salisbury once before, in 2011, when it attracted about 36,000 visitors. The new exhibition runs until 25 March.

Article extracted from The Guardian

By StonehengeNews in Uncategorized, Visit Salisbury on September 17, 2016.
← Scientists prove that stone monuments in Britain were built with astronomy in mind Fundraising Event: A talk by Mike Parker Pearson ‘Stonehenge and Durrington Walls: new research’ →